Why Birds Matter and How You Can Lend Your Helping Hands 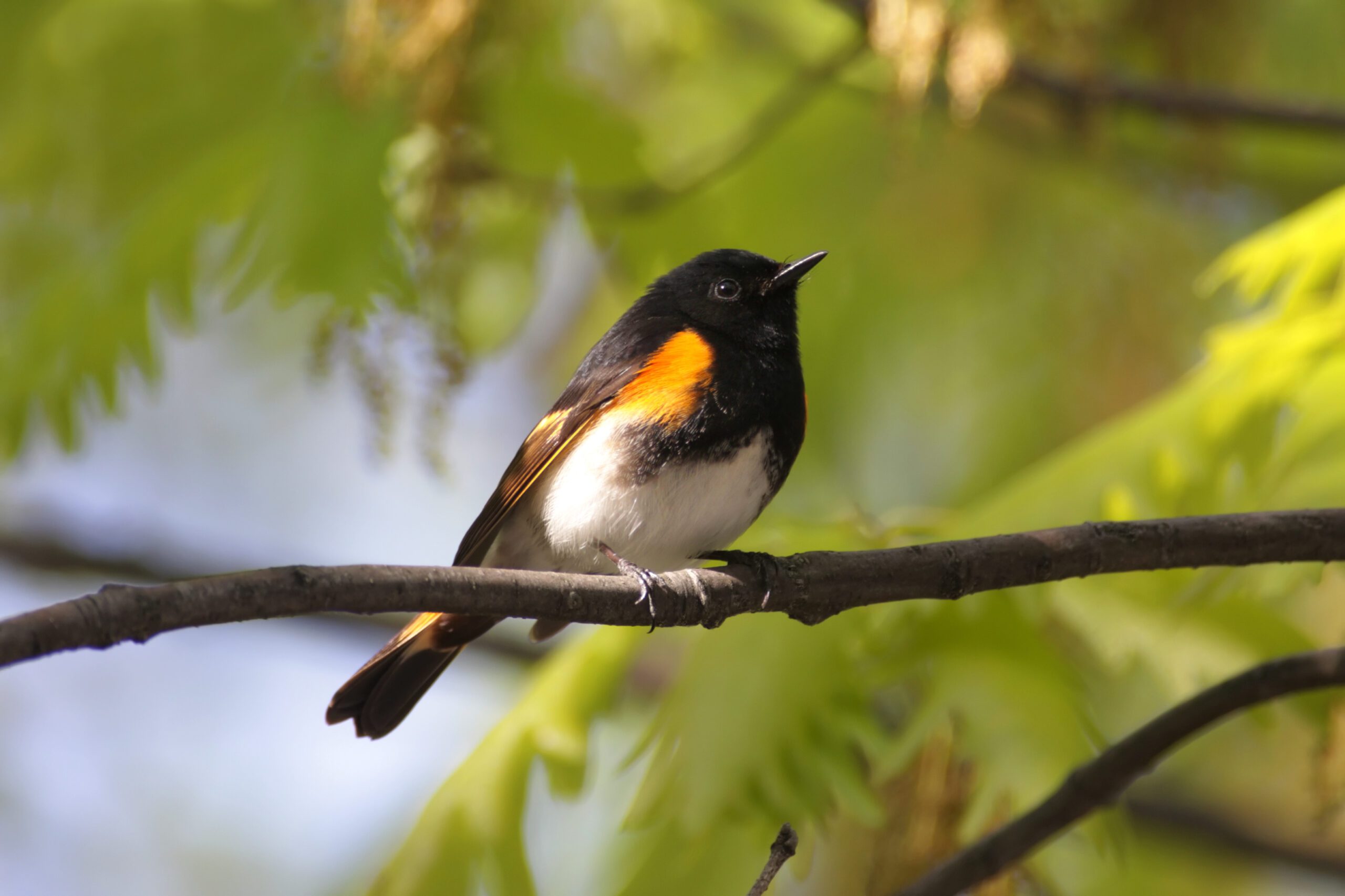 This past Earth Day, Many Helping Hands 365 partnered with the Brookline Bird Club, Mass Audubon, the Feminist Bird Club Boston, Magazine Beach Partners and The Boston Birding Festival to offer four free bird walks in and around Cambridge. Participants spotted resident birds and migrants—from raptors to warblers to a very talented mockingbird—and learned a little about green spaces and urban bird conservation.

So why should we care about birds? Let us count the ways!

Birds help create a healthy environment by removing waste and disease. Without vultures, for example, pathogens like anthrax and rabies would be more prevalent  in the environment. Birds even prey on white-footed mice, which are vectors for Lyme disease. And birds also provide nutrients in areas around coral reefs that then support healthy marine life communities and habitat.

Birds are pollinators—in some cases, they’re the primary pollinators for certain species of plants. They also disperse seeds and bring native plants back to where they should be found. Birds also eat  massive quantities of insects that would otherwise destroy gardens, agriculture and the northern boreal forests. Coffee and grape growers, especially, depend on birds.

Birds inspire human imagination. You can find birds in art and music worldwide—from Mozart to hip hop, cave paintings to pop. They are used to symbolize  freedom, love, peace, war, and long life. Films, TVand video games feature dozens of animated ducks, cardinals and woodpeckers. They appear in the traditional stories of many indgienous cultures and religions. And birds and eggs are part of many human food traditions and rituals. It’s hard to imagine a culture without them. They connect us to the natural world because they are everywhere and in many ways they are like us—they walk on two legs, form strong pair bonds, communicate vocally and they are social.

Birds also inspire great scientists like Darwin—and they inspire every day individuals to become observers and citizen scientists. In fact, much of what is known about birds is rooted in the discoveries and observations made by average people.

Most importantly, birds serve as environmental sentinels. When bird populations and habits change, that’s a sign something is changing in the environment.  And we should listen.

The Loss of Birds

The bird population of North America has lost 2.9 billion breeding adults since 1970. That’s one in every four birds. What once were common birds are now no longer common. More than 90 percent of this loss comes from just twelve families including the sparrows, blackbirds, warblers, and finches. It is “a staggering loss that suggests the very fabric of North America’s ecosystem is unraveling,” say researchers John Fitzpatrick from Cornell University and study co-author Peter Marra.

These declines are largely the result of  human activity and habitat loss. If you care about birds, here are a few things you can do personally to help save birds.

It’s estimated that almost a billion birds die each year from collisions with buildings. If you see a stunned bird on the sidewalk (call a rehabber when you see injured wildlife), it may appear to recover and fly off, but often it does not survive. Their brains will swell and bleed, and they will die a few days later. And yet with a few simple adjustments, it’s easy to make the windows in your home, your school or office safe for birds.

Cats are estimated to kill more than 2.6 billion birds annually in the U.S. and Canada. After habitat loss, cats are the #1 human-caused reason for the loss of birds—63 extinctions can be directly attributed to outdoor and feral cats.  (Link) . Feral cats in particular  play a key role in this loss—there  are 60 million feral cats contributing to the extinction of birds, mammals. insects and reptiles. But outdoor pets are also a problem. Even when cats don’t kill birds, when a cat mouths a bird, it infects the bird with  pasteurella, a deadly bacteria found in the mouths of cats, and the bird dies a grisly death.

No cat needs to be free to roam outdoors—in fact outdoor cats are more susceptible to disease, predators, infections, and injuries than indoor cats. Cats can live happily indoors or they can be contained in outdoor enclosures. Veterinarians confirm that you can provide plenty of adequate stimulation for cats indoors. You can help save wild species by keep cats indoors or contained and by reporting feral cats to your local officials.

The U.S. has 63 million acres of lawn. Imagine if part of every lawn were re-designed to support wildlife. When you plant native plants, you make a home for native insects and butterflies and the native birds that eat them. You can provide great habitat for hummingbirds in your yard with just a few native plants instead of using a feeder that can spread disease.

Pesticides have a long history of killing birds. DDT almost killed off Massachusetts peregrine falcons and eagles but fortunately, thanks to many volunteers, birders, and legislation, these species are now in recovery.

The latest pesticide problem in Massachusetts involves rodenticides. As Boston experiences a rat population explosion, rodenticides have become much more widely used. The problem is that a wobbly or slowly dying rat is easy prey for a hawk, falcon or eagle. Eating too many poisoned rats will also poison and eventually kill these birds.

Commercial pesticides work by stopping the blood clotting processes, causing lethal hemorrhage. Many animals, such as squirrels and chipmunks as well as domestic outdoor cats and dogs may also eat rat poison—either directly or by eating dead or dying rats. Poisoned animals tend to die slowly. Most rodenticides are also toxic if inhaled. In addition National Audubon has reported that in a four-year EPA survey (1999 to 2003), “at least 25,549 children under age six ingested enough rodenticide to suffer poisoning symptoms. Currently about 15,000 calls per year come in to the Centers for Disease Control from parents whose children have eaten rodenticides. Even if you place bait where children can’t get it, rodents are apt to distribute it around your house and property.”

Bird poisoning  appears to be widespread in Massachusetts. Tufts Veterinary School took blood samples from birds or prey that were brought in for care. These included birds that had been involved in car or building strikes or even juvenile birds that had fallen out of the nest. Almost 100% of the birds they saw had some degree of rodenticide poisoning.

The Massachusetts statehouse is currently considering a bill to study the effects of rodenticide use. You can contact your state representatives and let them know your thoughts on rodenticide use.

The City of Cambridge currently allows and even encourages the use of rodenticide as a way of managing a rat population, If you disagree with that advice, please let your voice be heard. Encourage the city to offer alternative solutions that do not harm birds.

Shade-grown coffees are organic, delicious, fair trade and economically beneficial to many small farmers. They help provide winter habitat for more than 42 species of North American songbirds. Coffee is bird-friendly if it has this seal on the packet.

Half of Americans drink at least one cup of coffee a day. Imagine the impact we could have by going bird friendly!

Here’s the bad news: there are 4,900 million metric tons of plastic in landfills and in our environment worldwide, polluting our oceans and harming wildlife. Even today, most  plastic is not recycled and even when plastics are recycled they often create microplastic pollutants. Plastics and microplastics are killing birds at a rapid pace. Plastic fishing line and plastic pollution are killing seabirds. At least 80 species of seabirds consume plastic mistaking it for food. Cigarette lighters, cigarette butts, and other trash have been found in the stomachs of dead albatrosses on remote islands.

We must reduce our single use plastic—eliminate what we can from our own lives and then advocate for better choices more widely. Eliminating plastic isn’t just about birds——it reduces our use of fossil fuels and chemicals generally. Cambridge already bans plastic bags but we can do more. Advocate for bans of plastic bottles, styrofoam, and straws, and ask restaurants and other businesses to phase out single-use plastics.

Try going plastic free for a week as a way to raise your own awareness of how you use plastic. Or log your plastic use to see what you can change. And join your Zero Waste community for support. Share ideas with us at #MHHH365

Monitoring birds is essential to help protect the environment, but tracking millions of birds depends on citizen scientists. You can lend your helping hands and play a role.

Join a project such as eBird, Project FeederWatch, Christmas Bird Count, Breeding Bird Survey, or the International Shorebird Survey. Note: If you don’t yet know how to use eBird, there is a free course to help you get the most out of the project and its tools.

You can also mobilize  others in your community by organizing school groups and  bird walks and submitting your counts to eBird. If you need an experienced guide, email us or reach out to one of Massachusttes many wonderful bird clubs for a volunteer. Support organizations that coordinate monitoring projects.

Get started today.Thank you for lending your hands and hearts to help to save wild birds!

Click for quick, affordable ways to keep birds from hitting your windows.

More info about Bird strikes and what you can do

Follow bird migration forecasts to know when birds are on their way to you.

Help pass the Bird-Safe Buildings Act in your state.

The cat story from the perspective of a wildlife rehabber

The ethics of keeping outdoor cats
From the American Humane Society

Check out these links for ideas:

How to have a healthy lawn

Learn more about pesticides and birds:

About Rodenticides and Raptors

The Threats Rat Posion Poses for Birds of Prey

Pesticides are Bad for Birds

Reduce or eliminate your use of plastic.

We know it’s not easy, but every bit helps. Here are some ideas to keeo you going.

Tips to use less plastic

Keep an eye out for for biodiversity days, clean-ups and Nature in the City events. Meanwhile….

Find a project that matches your interests

PHOTO: American Redstart (Setophaga ruticilla). This little bird is a warbler and can often be found in May and June around Magazine Beach, Alewife Reservation, Mt. Auburn Cemetary and Daheny Park.

Young males and females are grey and yellow and they frequently flash their colorful patches. Redstarts spend the winter on coffee plantations and woodlands in Central America before stopping off in Massachusetts on their way to northern forests.