The river’s industrial history begins in the 1700s when it was used for waterpower. In the 19th century. It became a shipbuilding center. As the watershed was developed, fields became parking lots, footpaths were replaced with roads, and the riverbanks became real estate for industrial activity and oil storage. Then the Clean Water Act passed  (1972) and made it unlawful to discharge pollutants into navigable water. That was a turning point for the Mystic and the beginning of an amazing story of restoration.

But the work is not yet done. As the most urbanized watershed in New England, the Mystic River watershed is especially impacted by stormwater pollution. 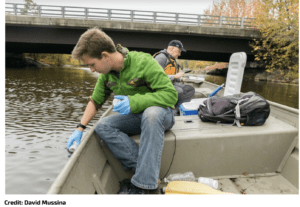 In this presentation, we’ll share the incredible story of this watershed’s restoration and talk about challenges to the watershed today. We’ll also take a look at the river today—as habitat for critical species, as green space and recreation for all people, and as a critical part of a regional response to the challenge of climate change. We’ll also explain how you can get involved in helping to protect this important watershed.

About the Mystic River Watershed Association

The Mystic River Watershed Association uses science, advocacy and education to ensure a vibrant, healthy and resilient environment for all plants, animals and people that call the watershed home. From building engaged community members to making on-the-ground improvements — stewardship programming is an important pathway for MyRWA to improve our river; while our formal education ensures that the next generations understand the issues facing the Mystic and its importance.

Patrick Herron is the Executive Director of the Mystic River Watershed Association.  During his tenure with the organization, he has focused his efforts on catalyzing collaboration with municipal partners, applying best practices in water quality sciences, promoting green infrastructure and preparing the watershed for a warmer and wetter future.

Currently, he is focused with his colleagues on centering equity and justice in their work as the organization begins a new strategic planning effort. He serves as co-chair of the EPA-convened Mystic Steering Committee and was awarded the EPA Merit Award in 2012.

Melanie Gárate enthusiastically joined the MyRWA team in October 2019 working towards climate resilience and justice in the Mystic. She holds a Master of Science degree in Marine Ecology and Climate Change from the University of Rhode Island where she studied nutrient cycling and greenhouse gas fluxes from coastal Rhode Island and Puerto Rico. Prior to MyWRA, she focused on educating community members of the greater Boston area at the New England Aquarium and Mass Audubon. A native of the Pacific Ocean and Andean mountains of Chile, Melanie enjoys hiking and spending time by the water with her Puerto Rican street rescue dog. Pronouns: she/her/hers