A Bird Made From Leftovers 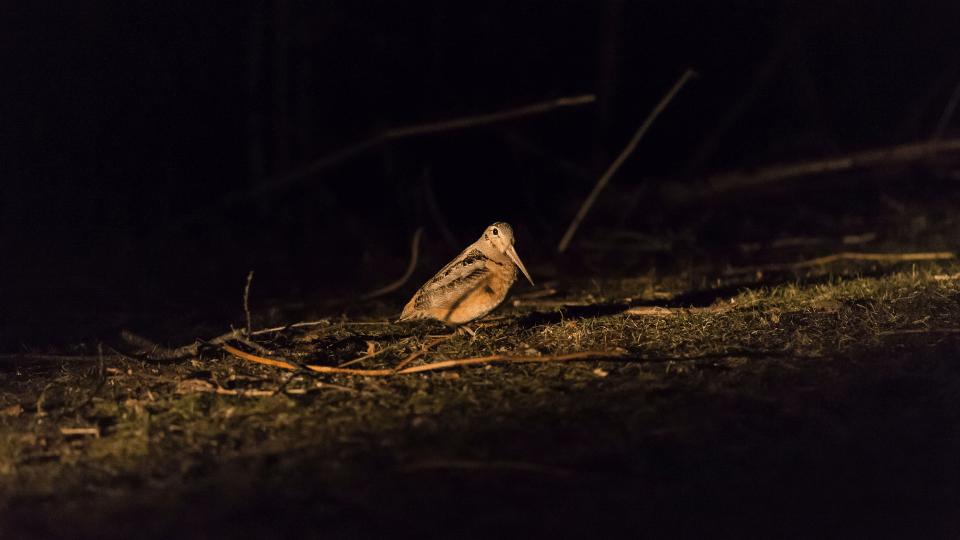 05 Mar A Bird Made From Leftovers

Celebrate Earth Day by organizing a viewing party for family and friends one evening in April. You can get guidance here.

Meet the the Amercian Woodcock—the Timberdoodle. The Bog Sucker. The Hocompoke. The Mud Rocket. The Labrador Twister. The Night Patridge. Or the Brush Snipe.  Whatever you call it the American Woodcock is a true sign of spring in New England.

The latin name for these birds is Scolopax minor. All the Scolopax birds are sandpipers (also known as shorebirds). Woodcocks, though, are forest sandpipers. 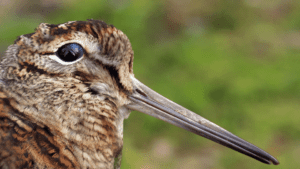 The Seneca people liked to say that the woodcock was from the leftover parts of other birds. And it’s true. It doesn’t look like its parts go together.  It starts with their weird shape — like a small melon on legs, about the size of a pigeon—and a long bill that is at least as long as the bird itself. That bill is unusual— flexible, like the end of your nose. Woodcocks can move both their upper and lower jaws independently, which is not something humans can do.  On the tip of that long bill are special cells that can sense motion and even chemicals, like the kind that you might find in earthworm urine.

The woodcock’s large feet are also unusual. Researchers believe that their feet are sensitive to vibration so they can feel the movements of earthworms in the earth below. You can sometimes see them do a little dance when they are foraging as they shifting from one foot to the other in a lazy version of the hokey pokey. You’re more likely to spot woodcocks when they are doing their dance because when they are still, they are nearly invisible. Few birds are as well camouflaged as the woodcock.

Looking a bit more closely, you can see that a woodcock’s eyes are also on the back of its head. But, if you think like a woodcock for a moment, this odd design makes sense. Woodcocks eat worms. They stick their long bills into the leaf litter and soft earth to probe and  catch worms and other invertebrates.

If your eyes are in the back of your head, what happens when you look down?—your eyes are on top of your head! That means can see any predators from above and behind when you’re distracted by food.

Last but not least, woodcock have short rounded wings. Short wings aren’t built for speed, but it does make the woodcock extremely agile. Even with these short wings, woodcocks are successful migratory birds. While they don’t migrate far (only to the gulf states), they can easily fly a thousand miles at a time without stopping.

Woodcocks love young forest habitat and are perfectly adapted to live there. Young forests often have more biodiversity than mature forests and the leaf litter is not as deep as it is in an older forest so woodcocks can find food more easily. 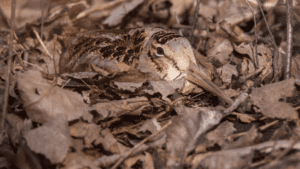 One habitat is not enough, however. These birds need a mixture of forest openings, shrublands, and forests in uplands and lowlands in close proximity to one another. They use different habitats for feeding, mating, observing each other, and nesting.

The best woodcock habitat is young hardwood forest that is not too far from water. The woodland should have a nice carpet of leaves on the ground, but not be too deep. A woodcock also needs access to about at least a 1/4 acre of semi-open brush space. Such a space might be created by wildfire, a flood, a large tree falling over, by over grazing of deer, or by human activity like farming or clear cutting. These open spaces serve as the woodcock singing grounds. Ideally there are thick shrubs, bushes and grassed around the perimeter.

Woodcocks are a migratory species. They spend the springs and summers across eastern North America well up into Canada and their winters around the Gulf coast. Once they arrive, they spend time recovering from their journey and start fattening up on worms,

When a woodcock male is ready to mate, it waits for dusk and flies off to a singing grounds that he has pre-selected.  As the sun sets, the bird will slowly start to make a  call—Peeeeent. His peenting  will get louder and more frequent as he gets read to display. The sound any females in the area to gather round and watch the show and also warns other males to away. Females usually stay hidden along the edges of the field. Once you find a spot where you can hear a lot of peenting, that’s a good place to  watch for the show.

These peent sounds  turn into a irregular whip whip whip sound and then into a very fast fluttering sound as the  the male takes off and flies 300 feet in the air. He pauses and hovers in a circle for perhaps half a minute. Then he comes zigzagging and spiraling back down head first, all while singing. He even makes sounds with his wings—just like mourning doves does. Those short wings come in handy when these birds are trying to pull out of their dive. And they usually start and end this display at almost exactly the same spot.  Once they land, the peenting starts again to get the attention of the females.

So why do they do it? To attract a mate. But that may not be the whole story. The brilliant ornithologist Richard Prum believes birds sometimes do these things out of exuberance and out of an appreciation for entertainment or performance, just as we enjoy a movie. It’s easy to get caught in the trap of thinking that everything a living creature does has an “fitness” purpose. Prum argues in his book The Evolution of Beauty that birds, like humans, may also have culture and an appreciation for their culture.

Seems about right, I think!